The Ferry Family Memorial Scholarship was named after Chad Ferry and Sharon Ferry, community members from the Ferry family whose lives were ended tragically, and far too soon.

Chad lost his life in a car accident in the summer of 1988, a few months before he was to enter his senior year at Gobles High School.

Chad is remembered as a kind young man, quiet and respectful, who always had a smile on his face, until it was game time, and then he was a fierce competitor who would do whatever he could to help his team get the win. He is remembered as a consummate teammate, and a Gobles Tiger through and through. During high school Chad was a member of both the basketball and baseball teams, and in his spare time loved to be outdoors, fishing or just spending time on an area lake.

The year after Chad's death, a scholarship was established in his memory, to be awarded to a senior who meets the following criteria:

Congratulations to James Sandahl, the 2019 recipient of the Ferry Family Memorial Scholarship. 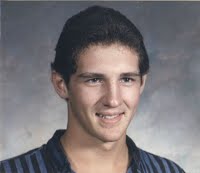